You are here: Home / News / So that’s a Tiger shark then. How very large and stripey.

Went out for a dive at Lone Tree with Katie, Bill and Sue. Katie had been staying at Crusoe’s Retreat for almost a month and had done 20+ dives with us, Bill and Sue are from Alaska – he a bush pilot with a fund of good stories, she a marine biologist who was used to working on the contents of walruses stomachs in the Arctic.

We dropped in at Lone Tree at about 9.35 am. The aim was to find a Leopard shark that Mesake said lived at around 27 m on the sandy bottom at the edge of the reef, so we planned a max.27m multilevel dive. As we swam down the sandy bottom past the tree I was pleased to see that the viz wasn’t too bad – the channel can be pretty green and cloudy because of fresh water flowing in from the creek, but whilst it was green, it was relatively clear, 10metres or so. After a couple of minutes sculling down the reef, the first thing to turn up were 5 or 6 yellowfin barracuda. They did the usual curious cuda circle, then continued on past us .

Then a turtle popped out and swam off. After about 10 mins I was starting to wonder whether we would find the alleged Leopard, and was feeling mildly pleased that if we didn’t, Sue was a marine biologist so that I could pull out the “That’s what we call cryptic megafauna” line and someone would actually understand it.

Then there it was, exactly as Mesake had said it would be, on the sandy bottom at 27 metres, head just under a rock. We sculled over and knelt a couple of metres away, and I shone a torch on it. After a short while it pulled up and swam lazily away back up channel, its long tail swirling gently. Everyone was pleased and we started to slowly ascend as we continued along the channel, in line astern 4 or 5 metres away from the walls. As we got up to about 20 metres, glancing out across the channel, I noticed a shape, probably 5 or 6 metres away from me. A large shape. A very large shape. My train of thought, compressed into a microsecond or so went as follows:

Wow! A whale shark! What a weird place for a whale shark. And it appears to have stripes rather than spots…oh. Yes. Right.

So that’s a Tiger shark then. How very large and stripey.

Also, there was a second immediately below and behind it. The eye, black and unblinking, seemed to be focused right on me. It probably was. They very slowly went past, eyeing us up and trailing a couple of remoras, headed up channel. 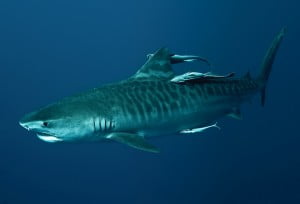 So that’s a Tiger shark then. How very large and stripey.

Watching them, I backed towards the reef edge, beckoning my divers in. Everyone followed suit fairly rapidly, and the sharks carried on, slowly merging into the green water. A chunky shot of adrenalin was pumping merrily through my body, helped on its way by a healthy dose of fear and a distinct sense of awe.

Okay then. The tigers didn’t seem particularly interested in our little group, but what should we do next? Should we terminate the dive and surface? Hmm. That would mean ascending in the middle of the channel with 27 metres of green water beneath us and waiting whilst the boat came and picked us up. With those two mooching somewhere underneath or behind us, possibly looking out for splashy things at the surface. No, on balance it seemed preferable to stick to the side of the reef and keep gently ascending and heading towards the mouth of the channel where the reef shelved out from the edge and the water was clearer – the viz had already got bluer and clearer and was probably about 12-15 m

As I was thinking this, another tiger appeared, dead in front of me at my depth and heading straight towards me.I don’t recall thinking anything other than “Blimey. Three tigers. How very unusual.” About 6 or 7 metres in front of me it changed its angle, and glided slowly down and out towards the middle of the channel, over a big bommie where it was thronged by a school of red snapper, like starlings round a hawk. This one was probably about 3 metres long, smaller than the first one – the size of the second one I hadn’t really taken in, being deeply focussed on the sheer presence of the first – how big, close, stripy, scary and absolutely frikking awegenerating it was. This one too continued along up channel under us, staying in view much longer as the viz was better.

After it disappeared we also continued along the channel, albeit in the opposite direction, and everyone appeared to have adopted a new method of finning which went as follows: kick, kick, swivel round, peer behind. Kick, kick, swivel round, peer behind. At this point, Bill, who was just behind me, reached 50 bar, and as per my briefing, decided to alert me to this. To attract my attention he gave a gentle tug on my fin, at which I nearly spat my reg out and span round so fast that I may have affected the earth’s gravity field. Turning back round to face forwards, a nurse shark shot out of the reef immediately in front of me and dived down into the channel. That didn’t help much either.

Now in lovely clear blue water, we reached the shallower plateau section of reef where we did our safety stop over the stunning hard corals on the reef top. Nobody seemed to be looking too hard at the reef mind you. After 3 mins we surfaced and I signaled to Selemo, about metres away over deeper water, to bring the boat over. Sele signalled to me that he would like us to swim out away from the reef. I signalled back that I would prefer to stay where I was and be picked up over here, thank you very much, and if you could possibly make it fairly snappy that would be much appreciated. Again, a new surface technique was adopted whereby everyone kept their masks on and had a quick look round underneath us every 3 seconds or so.

Back on the boat, the main feeling was one of exhilarated disbelief – not a high fiving whoopwhoop kind of feeling, more contemplative awe at the sheer presence of these amazing creatures. The adrenalin buzz continued for quite a while after – I found it difficult to stop grinning for about 2 hours. As I mentioned to Sue later, they were definitely the least cryptic megafauna I had ever come across!