Zebra sharks get their name from their juvenile appearance: dark bodies with yellowish stipes. As they become adults their coloring changes to a light tan with small dark spots. This adult appearance leads to them often being mistakenly called Leopard sharks. The Zebra shark has a distinctive long tail that is almost as long as the body and prominent ridges that run the length of the body. 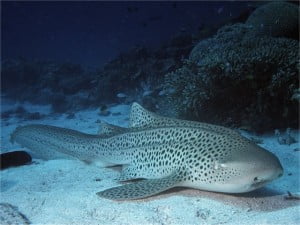 Zebra sharks are found in the Pacific Ocean, between Japan and Australia and in the Indian Ocean, between the Red Sea and Australia. Zebra sharks live in tropical waters and inhabit sandy or coral bottoms between 0 – 206 feet (0 – 63 metres) deep. They are usually encountered by divers while resting on the bottom and can sometimes be seen swimming slowly (particularly at night). 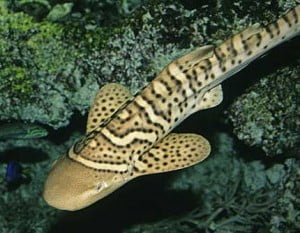 Zebra sharks mainly feed on mollusks, crustaceans, and small bony fish. Their flexible body allows them to work their way into narrow coral channels and crevices to search for food.

Zebra sharks may be vulnerable to other large sharks, but are most threatened by humans. 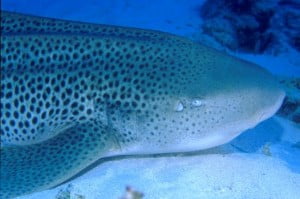