Sharks are an ancient life form. 400 Million years ago, before man was on the Earth, before the Dinosaurs walked the planet, there were primitive sharks. The body and biology of the shark is so perfectly adapted to its lifestyle that it has hardly changed in the past 65 million years.

This amazing fish has no bones, a skeleton made of cartilage, and teeth that never stop replacing themselves as old ones fall out. They can live to be at least 25 years old, but for many species exact maximum ages are not known.

Most sharks do not breed until they are between 5 and 15 years old, and usually only once every year or less often. Most of the sharks found in Fiji give birth to between 2 and 10 live babies at a time. 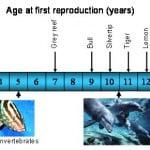 Some sharks give birth to live young (Viviparous), some lay leathery eggs (Oviparous), and some reproduce in a mixture of the two methods, where eggs form but are kept inside the mother’s body until they hatch and are born (Ovoviviparous). 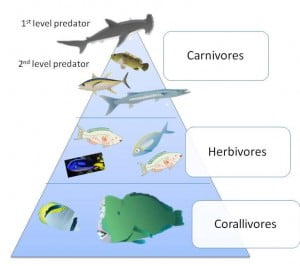 At least 35 species of shark are found in Fiji’s coastal and near coastal waters. The most common ones are quite easy to tell apart.

Because of this late breeding age and small number of babies born, sharks are very vulnerable to overfishing, being slow to replace their numbers once killed.