You are here: Home / News / Results of Three Years of the Great Fiji Shark Count, April 2015

Over the past 3 years, dive operators across Fiji & their diving & snorkelling guests have been recording their Shark, Ray & Turtle sightings over the months of April & November. Thanks to those dedicated divers, we now have some interesting facts to share about Shark populations in Fiji.

The data is analysed by the number of Shark/Ray/Turtle sightings recorded on every dive by every diver who takes part.

This is called number of sightings per observation. Because there are usually many divers on each dive, we have thousands of observations every month.

We have separated dives where feeding was carried out from those where no feeding was done.

There have been some unexpected and exciting sightings recorded over the past three years.

From a very enthusiastic start in April 2012, we have formed a reliable core team, representing operators on Viti Levu, Beqa, Taveuni, Vanua Levu, the Mamanuca and Yasawa islands, and the Lomai Viti / Vatu-i-Ra area.

We’d like to thank those operators who have stuck by this project and worked hard to get the data to us in a useful format!

The number of dives and of observations (every diver who takes part makes one observation per dive) has been in the thousands every time, with the highest total of 4,278 observations in November 2013.

Continuity of data is vital if we are to make our case for Shark Conservation, and we’d like to recognise and thank our contributors, especially those who have been with us from the start, and continued every six months.

Others have joined us recently, and are welcomed to the ranks.

The results can be found here: 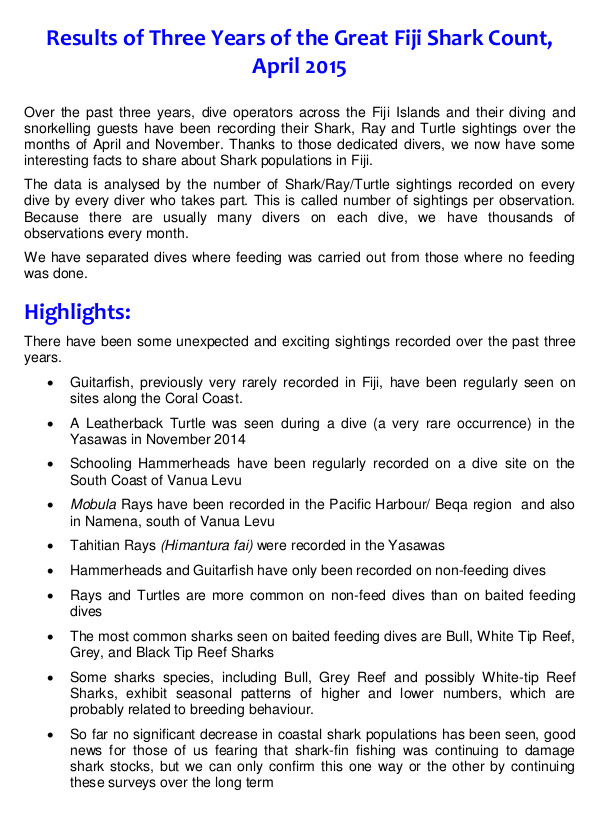