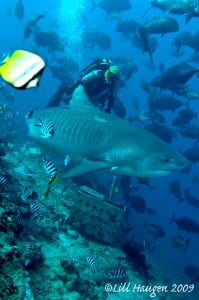 Habitat and Biology: A common, wide-ranging coastal-pelagic tropical and warm-temperate shark, with a wide tolerance for different marine habitats, on or adjacent to the continental and insular shelves at depths from the surface and intertidal to possibly 140 m. It seems to prefer turbid areas in continental waters, large island groups or high volcanic islands where high runoff of fresh water may contribute to a high density of prey organisms. It often occurs in river estuaries, close inshore off wharves and jetties in harbours, and in coral atolls and lagoons. It is also known to make excursions far offshore, in the open ocean, but is not a truely oceanic species like Prionace and certainCarcharhinus. It does occur off oceanic islands far from other islands and continental land masses, and probably is capable of long oceanic voyages between islands.

The tiger shark is apparently nocturnal, and shows a localised diel cycle of movement inshore at night into shallow bays, estuaries, passes between islands, lagoons, and other shallow areas sometimes barely deep enough to swim in. By day the sharks retreat to deeper water off reefs and in deeper areas of bays and lagoons where they remain until nightfall. During the day, smaller tiger sharks may be more active, less timid in light, and less reluctant to approach the surface than large ones, though all sizes come to the surface at night. Although tiger sharks may form aggregations, especially when feeding, the species may be more often solitary. 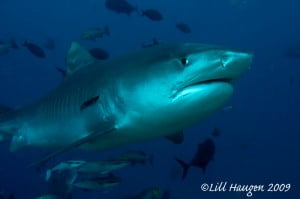 Adults and subadult tiger sharks may be resident or semi-resident around oceanic islands, with movement by some individuals into or out of the area. With depletion of a resident population around such islands, smaller individuals will gradually recolonise them, probably by swimming across the open ocean. Seasonal movements have been noted for continental waters.

The tiger shark is an active, strong-swimming shark, ordinarily seen cruising slowly with a sinuous motion that has been described as ‘sluggish’. When attacking or fleeing it becomes highly active, and is capable of bursts of high-speed swimming. It can be kept in aquaria, but usually does not last more than a few months.

This is the only ovoviviparous carcharhinid, but it is uncertain whether ovovivipary is primitive in the tiger shark or due to loss of the vitelline placenta. The related Hemigaleidae, the apparent sister group of the Carcharhinidae, has vivipary (placentovivipary), suggesting that the condition in the tiger shark is secondary. Pupping is reported in spring and early summer, April to June in the Northern Hemisphere, and probably November to January in the Southern. Size of litters very large, 10 to 82. The gestation period may be slightly over a year. In the Northern Hemisphere, mating may occur in the spring. This species may mature at between 4 to 6 years old and live to at least 12 years.

The tiger shark is perhaps the least specialised of sharks as far as feeding is concerned. It eats a wide variety of marine life as well as being somewhat of a ‘garbage-can with fins’ in its taking of carrion and all manner of inedible objects. The tiger shark is a ‘sea hyena’, a potent predator-scavenger that opportunistically exploits its environment. It takes a wide variety of bony fishes, including tarpon, ten-pounders, eels, sea catfish, mullet, wrasses, parrotfish, goatfish, jacks, mackeral, tongue-soles, flatheads, flying gurnards, batfish, triggerfish, porcupine fishes, boxfish, and puffers. Elasmobranch prey includes many other species of sharks, including bramble sharks, spiny dogfish, sawsharks, angel sharks, bullhead sharks, grey sharks, sharpnose sharks, hammerheads, and even other tiger sharks, as well as guitarfishes, skates, whiptail and round stingrays, butterfly rays, mantas and spotted eagle rays. It is thought by at least one writer (S. Springer) that large tiger sharks cannot readily take uninjured small sharks and bony fishes, but are extremely opportunistic in attacking hooked and netted fishes, including other sharks, and are somewhat of a problem to shark fisheries in the tropics because they do this more than other species of large sharks. However, they often manage to hook themselves after eating hooked fishes. This shark takes marine reptiles more than any other species, and frequently preys on sea turtles (green, loggerhead and ridley turtles) and is one of the most important predators on sea snakes. Presumably Galapagos marine iguanas are eaten by the tiger shark, and in one instance a large green iguana was found in a tiger shark’s stomach. Sea birds, including shearwaters, frigate birds, cormorants and pelicans, are taken, along with migrating land birds that fall into the water. Marine mammals taken by the tiger shark include sea lions, fur seals, monk seals, dolphins, possibly porpoises, and meat from a small baleen whale (probably taken as carrion); pinnipeds are apparently killed by the sharks, though cetaceans may be more readily taken as carrion. Invertebrate prey, including octopi, squid, cuttlefish, spiny lobsters, crabs, horseshoe crabs, conchs and other marine gastropods, tunicates, and even jellyfish, is, readily eaten, and tiger sharks have been found gorged with lobsters, horseshoe crabs and conchs. Carrion from terrestrial birds and mammals is commonly devoured, including that from dead chickens, rats, pigs, cattles, sheep, donkeys, dogs, hyenas, monkeys, and humans. Apart from people definitely known to be killed and eaten by tiger sharks, some of the other terrestrial vertebrates found in tiger shark stomachs may have been taken alive as well as in the form of carrion. These may become vulnerable to tiger sharks when they swim across estuaries or other bodies of water inhabited by these sharks, or when they fall or are tossed off of ships. The tiger shark is famed for swallowing an incredible variety of floating and bottom junk of human activity and natural sources, including leather, fabrics, pieces of coal and wood, seeds and other vegetable material, feathers, plastic bags, burlap bags, small barrels, cans, pieces of metal, etc.

The tiger shark is one of the most dangerous sharks, with more confirmed attacks on divers and swimmers (including multiple attacks) and attacks on boats being recorded for this species than all other sharks except the great white shark. Because most shark attacks occur in the tropics, where this species and other dangerous requiem sharks abound, this and other dangerous carcharhinids may actually be responsible for many more attacks than the far more notorious white shark. The tiger shark can be inquisitive and aggressive underwater, and may approach humans closely. In more than one instance tiger sharks have attacked divers while they were spearfishing or attracting sharks for photography, and had to be dissuaded by prompt aggressive action. An underwater encounter with this shark may not necessarily result in an attack, and may not result in an attack in most instances, but the species should be regarded with extreme caution because of its broad prey spectrum and lack of reluctance in eating unusual items. Certainly the tiger shark has the worst reputation as a man-eater amongst tropical sharks, and in part this may be deserved. In the West Indies and French Polynesia the tiger shark is considered the most dangerous of local sharks.