The combined range of the various species is tropical, subtropical and temperate waters worldwide. They often travel in large schools. 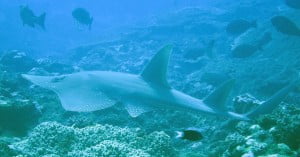 Guitarfishes have a body form intermediate between those of sharks and rays. The tail has a typical shark-like form, but in many species the head has a triangular, or guitar-like shape, rather than the disc-shape formed by fusion with the pectoral fin found in other rays.

It is found in Australia, Indonesia, the Philippines, and Thailand. Its natural habitats are open seas and shallow seas. It is part of a species complex that also includes the giant guitarfish, the broadnose wedgefish and possibly the smoothnose wedgefish.

The introduction of TEDs in trawl nets of some Australian fisheries, has significantly reduced the capture of large elasmobranchs (Brewer et al. 1998), however TEDs are not mandatory in several trawl fisheries in northern Australian and are probably not widely used in other parts of this species? range. The introduction of TEDs in other Australian trawl fisheries is highly recommended for mitigating bycatch of this and other at risk elasmobranchs.

Finning of Rhynchobatids is prohibited in some parts of Australia but there is thought be a continuing black market trade in their fins (Rose and McLoughlin 2001, McAuley unpublished data).

Discussion of Wedgefish-Guitarfish in Fiji

Very few species have been caught and examined. Indeed on trying to work out which ones we have had, we have found an interesting discussion between the experts themselves!

Here is the final outcome of many emails between the experts:

Thank you very much for these images. I have been studying descriptions and images of Rhynchobatus spp trying to get to the bottom of this one and these have proved very useful. The colour pattern of this individual is intermediate between Juerg’s and Randy’s specimens, and this combined with the colour variation evident in the image of mating guitarfish at Richelieu Rock, Andaman Sea, leads me to conclude that all of the Fijian examples and the Richelieu Rock specimens are probably Rhynchobatus laevis (smoothnose wedgefish/shovelnose ray). However, this will still need to be confirmed by examination of specimens (including x-rays) and/or genetic analysis.

Rhynchobatus laevis (Bloch & Schneider, 1801) was described from Japan as Rhinobatus laevis Bloch & Schneider, 1801. It reaches a maximum reported length of at least 270 cm and is a widespread Indo-Pacific species. Last & Stevens (2009) – Sharks and Rays of Australia – describe its colour as: “small white spot on midline of forehead …” [evident in Randy’s material]; black “pectoral fin spot weak or absent (usually much smaller than eye when present)” [consistent with Fijian and Richelieu Rock specimens – 1 male and the female from Richelieu Rock lack the black spot completely, whereas the other male has a conspicuous spot]; “multiple rows of small white spots along posterior margin of pectoral fin … pelvic fins similar to trunk dorsally, with small white spots and white anterior and posterior margins” [R. australiae, R. palpebratus and R. springeri apparently do not have white spots on the pelvic fins, R. springeri also has numerous spots on the head and snout which the Fijian species does not]; “trunk with mainly two rows of white spots, commencing just forward of pectoral fin insertion and extending to near insertion of first dorsal fin.” Last & Stevens (2009) however state that the posterior body is without spots. Randy’s specimens only have one row of conspicuous white spots reaching the second dorsal base and I think the extent of spotting along the body may prove to be a variable character. I have seen a number of images of what appear to be this species without any white spots on the trunk at all, and the males in the Richelieu Rock image differ quite dramatically from each other in this respect. One matches Last & Stevens’ description almost perfectly, while the second has multiple lines of spots extending almost to the caudal fin. The black spots on the underside of the snout of R. laevis also appear to be diagnostic – these are evident in Juerg’s specimen and may be the feature you circled in Alex’s and Randy’s images. The other external morphological characters discernable from the photographs are consistent with R. laevis but also most of the other described species.

Part of the problem attempting to identify guitarfishes from images alone is due to taxonomic confusion and out of date identification guides (i.e. everything is called R. djiddensis) but most of the descriptions and figures are also based on small, juvenile specimens because the adults are too large for most collections. As a consequence the colour pattern may differ from that of large adults. Another source of uncertainty is discrepancies between the written description of colour and the figured specimen (e.g. Last & Stevens 2009 – no white spots shown on posterior of pectoral and pelvic fins). Anyway here’s hoping Randy’s male specimen still survives somewhere in the freezer at USP!

Thanks again for your help. As a matter of interest where was Lill Haugen’s image of the guitarfish taken?