An exercise held across Fiji waters during the months of April and November to ascertain the shark and ray population enters its fifth year this month. The Great Fiji Shark Count, started by a group of scientists and tourism operators and led by Beqa Adventure Divers in Pacific Harbour and Marine Ecology Consulting in Lami, encourages divers to record and report any instances where they encounter sharks, rays and turtles; recording the number of sightings and species. 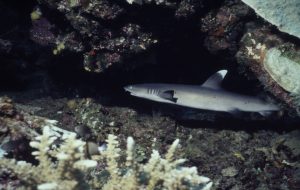 One of the biggest barriers to effective shark conservation is a lack of basic information on shark and ray populations. This is a problem we see throughout the Pacific, and a programme like this can provide some fundamental data for governments to be able to develop sustainable management plans and conservation measures for sharks and rays.”

“The beauty of the Great Fiji Shark Count is that it uses a fantastic resource of dive tourists who not only generate income for Fiji, but also reduce the cost to government for collecting much needed data. WWF would love to see similar initiatives set up throughout the Pacific which is why we are publicly backing the project,” Mr Campbell added.

Dive tourism plays a huge part in Fiji’s economy, with estimates of shark diving alone being worth over US$42 million (FJ$85 million). Mr Ben Saqata, a marine biologist at Beqa Adventure Divers said given that information, a group of prominent shark researchers recognised that tourists were potentially a great resource to help the Fijian government get more information on sharks, rays and turtles found in Fiji. 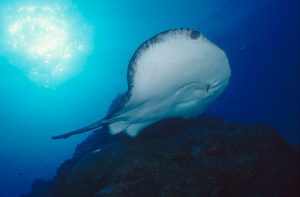 The Great Fiji Shark Count will have divers across Fiji waters record any sightings they have of sharks, rays a nd turtles
© Jürgen Freund / WWF

“With that in mind, they contacted like-minded individuals in Fiji who organized funding, developed the methodology and support materials, and then mobilized the Fiji dive tourism industry for this important citizen science initiative. We are proud to have participated in this event from the get-go, and can’t wait to see a first in-depth analysis of population trends of Fiji’s sharks, rays and turtles now that we dispose of a full five years of data. Our particular thanks go to Dr. Christine Ward-Paige of e-Shark whose support and guidance has been invaluable, and to the many sponsors who have helped turn this vision into reality,” Mr Saqata added.

Marine biologist Ms Helen Sykes, who coordinates the analysis of the data says the information generated will be analysed and compiled into a report that will show shark, ray and turtle population trends over the past five years.

“Back in 2011, the original idea for the Great Fiji Shark Count was to collect data that was otherwise unavailable, and provide it to the Department of Fisheries to inform their conservation and management plans. It is very hard to collect data on shark populations without an enormous amount of resources, but we have tourist divers in the water all over the countries who are very interested in shark conservation, and they are able to collect information that would take millions of dollars for scientists to gather. As divers love to watch sharks, rays and turtles, through this programme we are able to add to their experience, increase awareness of the importance of these species, and also raise Fiji’s profile as having a pristine reef environment that the Fijian Government wants to preserve and manage sustainably. The Great Fiji Shark Count is a win for all involved,” Ms Sykes said.

The Ministry of Fisheries is also a supporter of the programme and data collected will help the ministry with their shark management plans. This month’s Great Fiji Shark Count comes hot on the heels of Fiji’s global shark conservation successes at the recent CITES meeting in South Africa, where Fiji led calls to limit international trade in sharks and rays.