The Maskray (Neotrygon kuhlii) or Kuhl’s stingray, is a species of stingray of the Dasyatidae family. This ray is currently under investigation by geneticists and it is very likely that it will be reclassified in the near future, possibly as Neotrygon trigonoides.

The Maskray is light green with blue spots, but appears grey in the water with pointed wings and a disk width around 42 centimeters (17 in). It is sometimes confused with the smaller Oceania Fantail (Blue Spotted) Ray, which is rounder with brighter blue and more vivid spots. 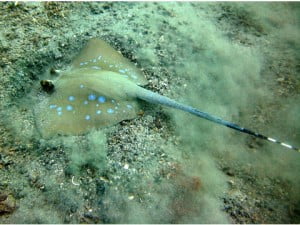 The full body of a Maskray, showing the black and white striped tail.

The Maskray has a flat disc-like oval body in about 42 centimeters (17 in) in diameter and 70 centimeters (28 in) in length; and their coloring is a dark green with blue spots with a light white underbelly also known as countershading. The Maskray’s  snout is very short and broadly angular along with its angular disc. The rays’ bright coloration serves as a warning for its venomous spines.

The ray has a very long tail accommodating two venomous spines on the base of the tail. The tail is about twice as long as the body of the ray, and the barbs or spines are two different sizes, one being very large and the other a medium-sized barb.

The Maskray has bright yellow eyes, and the eyes are positioned to allow them a wide angle of view. The spiracles, which allow them to breathe, are located directly behind the ray’s eyes. The ray’s gills and mouth are found on the underside of the body. The ray normally lives alone or in small groups. One unique characteristic of the Maskray is that they rarely bury themselves in the sand only to hide from predators, unlike the majority of rays who bury themselves regularly. 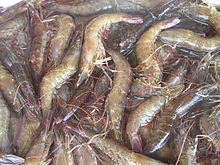 This type of ray feeds on shrimp, small bony fish, mollusks, crabs and other worms. Due to the fact that this ray is a shallow bottom feeder, it has a small variety of marine life to prey on.

The Maskray overpowers its prey by pinning them to the bottom of the seafloor with its fins. This ray does not have teeth, instead it has food-crushing plates on the sides of its mouth.

The Maskray is ovoviviparous. The embryos are retained in eggs within the mother’s body until they are ready to hatch. The embryos receive nourishment from the mothers’ uterine fluid. Mothers give birth to up to seven pups per litter; these pups range from 6 inches (150 mm) to 13 inches (330 mm) long at birth. The Maskray passes its offspring 32 sets of chromosomes.

The mother also has a annual reproductive cycle. Studies show that the mating season is in October and November and the ovulating season is in the Australian summer (December 1- February 28/29), which coincides with the embryonic development.

The Maskery is commonly found in waters of depths about 0–90 meters (0–295 feet), being found near rocky coral reefs.

This stingray is found in a tropical climate at 29°N- 31°S, and 20°E- 171°W. At high tide the Maskray moves out into the shallow lagoons and reef flats.