You are here: Home / News / Explanation of shark count method and analysis

So we had a very good question in an email recently asking for an explanation of shark count method and analysis used in the Great Fiji Shark Count. Helen answered below.

I wondered if you’d mind explaining something to me? Just so I can in turn explain better to guests….

I’ve been involved in projects like this before and one thing I’ve never quite understood and no one’s really been able to explain well to me: why is the focus on shark sightings rather than shark numbers? How does that help your research? In my head this shows us more the increasing number of divers in the area rather than the health of the shark population?

I’d love to understand better if you could clear this up for me.

It’s a good question and there are several answers:

1. The shark count isn’t precise enough to record actual numbers – in scientific fish counts we record population density: i.e., numbers seen over a measured area of reef (for example a belt transect 50m long and 5 m wide), and we can’t get that kind of data from what is known as “roving” dives where people swim where they like.

2. During a 1 hour “roving” dive it is not possible to know whether people have seen 3 sharks, or the same shark 3 times, so we honestly cannot say that we are counting real shark numbers.

3. We have a huge variation of precision over all the operators taking part – some are paying a great deal more attention than others, and we have to fined a way of comparing this varied data.

4. Frequency of sightings is an adaptation of a recognised Fisheries Science technique known as CPUE – Catch Per Unit Effort – where you record how long it takes people to catch what. This is often used to investigate the success of a protected area – if you used to catch 5 fish in an hour of fishing, and now you can catch 20 fish in 1 hour, we can assume stocks are rising (or vice versa).

5. For infrequently seen species such as sharks, it is a more representative measure of stocks than how many you might (or probably won’t) see along a 50m transect line.

6. It is true that if we have more divers in the water, they will see more sharks. If we only recorded the dives when sharks were seen, this would certainly skew the numbers. This is why it is essential to record ALL dives, including those with no sharks. The analysis will be in the form of percentage of dives where sharks are seen vs the percentage with no sharks, so ultimately the increased number of divers improves accuracy but does not skew numbers. If, 5 years ago, sharks were seen on 70% of all dives, and now they are seen on 30% of dives, we have a valid argument that populations are dropping.

See this page here for the analyses that were done after the first count, and this page after 3 years, so that you can see the kind of thing we are doing. 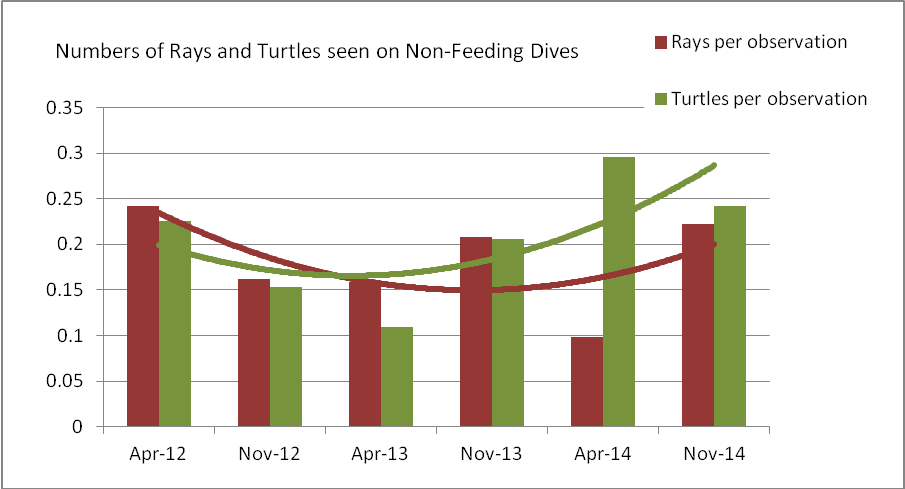 Average Numbers of Rays and Turtles per dive during each count

The 5 year analysis will be a great deal more detailed and scientifically rigorous that either of these (which were written for dive operator websites), but they will give you an idea of how the data can be used.

Hope this answers your questions. It’s good to know that someone is paying attention to what we are trying to do!