The Ocellated eagle ray, Aetobatus ocellatus (Kuhl, 1823) are part of a group of cartilaginous fishes in the family Myliobatidae, consisting mostly of large species living in the open ocean rather than on the sea bottom.

Ocellated eagle ray feed on mollusks and crustaceans, crushing their shells with their flattened teeth, while devil and manta rays filter plankton from the water. They are excellent swimmers and are able to breach the water up to several metres above the surface.

Compared with other rays, they have long tails, and well-defined rhomboidal bodies. They are ovoviviparous, giving birth to up to six young at a time. They range from 48 centimetres (19 in) to 9.1 metres (30 ft) in length.

They have a flattened body with a dark brown dorsal surface coded in white spots. Wing-like appendages. Head is obvious, with a flattened, tapered snout. Caudal fin is heavily modified into a whip-like form. Venomous spines may be found along base of caudal fin’s dorsal surface, it can have 1-5 spines. Shape and skin Size Length with-out tail id 1.2-2. Width: 300 cm diet Bivalves, shrimp, crabs, annelids, octopus, whelks, and small fish Groups. 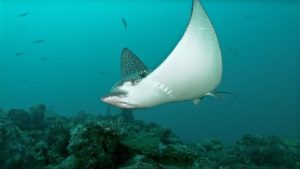 Ocellated eagle rays have flat disk-shaped bodies, deep blue or black with white spots on top with a white underbelly, and distinctive flat snouts similar to a duck’s bill. Their tails are longer than those of other rays and may have 2–6 venomous spines,[4] just behind the pelvic fins. The front half of the long and wing-like pectoral disk has five small gills in its underside.

Ocellated eagle ray preys mainly upon bivalves, shrimps, crabs, whelks, and other benthic infauna. They feed on mollusks and crustaceans, particularlymalacostracans. and also upon hermit crabs,shrimp, octopi, and some small fish.

The ocellated eagle ray’s specialized chevron-shaped tooth structure helps it to crush the mollusks’ hard shells.The jaws of these rays have developedcalcified struts to help them break through the shells of mollusks, by supporting the jaws and preventing dents from hard prey.

These rays have the unique behavior of digging with their snouts in the sand of the ocean. [17] While doing this, a cloud of sand surrounds the ray and sand spews from its gills. One study has shown that there are no differences in the feeding habits of males and females or in rays from different regions of Australia and Taiwan.[14]

Ocellated eagle rays prefer to swim in waters of 24 to 27 °C (75 to 81 °F). Their daily movement is influenced by the tides; one tracking study showed that they are more active during high tides. Uniquely among rays they dig with their snouts in the sand,[17] surrounding themselves in a cloud of sand that spews from their gills.

The rays also performs dips and jumps; in a dip the ray will dive and then come back up rapidly, perhaps as many as five times consecutively. There are two main types of jump: in one, the ray propels itself vertically out of the water, to which it returns along the same line; the other is when the ray leaps at a 45 degree angle, often repeated multiple times at high speeds.

When in shallow waters or outside their normal swimming areas the rays are most commonly seen alone, but they do also congregate in schools. One form of traveling is called loose aggregation, which is when three to sixteen rays are swimming in a loose group, with occasional interactions between them. A school commonly consists of six or more rays swimming in the same direction at exactly the same speed.