SHARK conservation around the country is gaining momentum with students adopting the once feared predator as their “friend”.

Sharkman Manoa Rasigatale, the veteran campaigner who has been visiting schools and villages in the three confederacies since April last year, said more people were becoming aware of the importance of sharks to our reef system and supported efforts to turn Fiji’s waters into a shark sanctuary.

“The children are the best listeners. They are our future and now understand better the value of sharks alive than dead,” he said.

“Everywhere I go, children of all ages share one thing ù that even though they may have feared them, they now regard sharks with more respect and friendship.

“That has been one of my greatest satisfaction, to plant the seed of conservation and help shape the thoughts of children to protect one of our greatest resources.

“Their response has been tremendous. They really want to participate in the conservation themselves.” 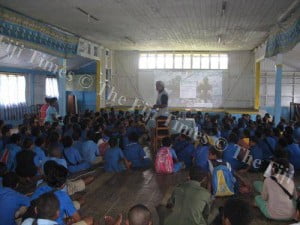 Children of Lomary listen intently as Manoa Rasigatale explains why the shark is important in our lives. Picture: PETERO TUIQALAU

The Coral Reef Alliance (CORAL), which Mr Rasigatale works for, has been researching shark species in Fiji’s waters, is working with the Pew Environment Group and the Ministry if Fisheries to push through legislation to make Fiji’s waters a shark kill-free zone. Shark species have been on the decline in recent years with local and foreign fishermen catching sharks for their lucrative fins for the Chinese market.

Mr Rasigatale said they had taken the awareness campaign to coastal villagers and schools and the support of elders and chiefs was encouraging.

A consultation for industry stakeholders has started and Mr Rasigatale hopes the feedback will help the ministry finalise legislation to be passed by Cabinet.
Ilaitia Turagabeci
Thursday, February 09, 2012