You are here: Home / News / Scuba Diving Hazards: 7 Dangerous Animals to Watch Out For

Getting up close and personal with underwater wildlife is one of the draws of scuba diving.

Most of the creatures you’ll encounter when you go on a dive are harmless, but there are others that you need to watch out for.

Not surprisingly we’re not talking about sharks. Below are some seemingly innocuous creatures can cause injury or death if you tangle with them. Keep an eye out for these creatures as you dive so you can enjoy a safe scuba experience.

By far the most dangerous creature you can encounter when diving, this octopus measures only about eight inches in size and likes to hang out in shadows and tidal pools. Its bite delivers paralyzing venom to which there is no known antidote. So if you catch sight of one with its bright blue rings, the best thing you can do is keep your distance.

Found in northern Australia, this “sea wasp” sports 15 tentacles at every corner of its large bell. Its venom affects the nervous system and heart, making a sting potentially fatal without immediate medical help. As with the blue-ringed octopus, there is no known antidote to a Chironex sting.

The idea of venomous flowers may sound strange, but that’s exactly what the flower urchin has. Unlike the traditional spines on regular urchins, which can cause a painful poke but aren’t exceptionally harmful, a sting from a flower urchin can paralyze or even kill a person. 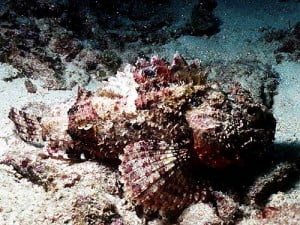 Fish in the scorpionfish family have extremely sharp dorsal spines that can poke right through your diving gear. Watching out for them can be a bit tricky since they’re good at disguising themselves, but the venom can cause truly painful effects. Be on the lookout as you’re exploring to avoid a dangerous encounter.

These underwater snakes fall into the “if you don’t bother us, we won’t bother you” category. Ranging in length from four or five feet to ten feet, sea snakes have traits of both regular snakes and eels. Their bite can be more venomous than a land snake but they aren’t prone to aggression unless aggravated. 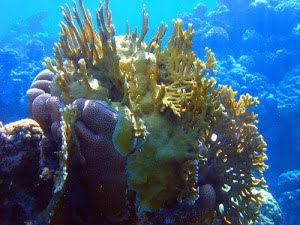 Coral is beautiful, but what fire coral can do is anything but. Gathering together in colonies, these brown or bright yellow-green organisms sport invisible tentacles whose sting can cause everything from irritation to nausea and vomiting. Other stinging corals are hard to identify but are usually similar in color to fire coral. It’s best not to touch coral in any case; whether or not it can sting you, your touch can cause a great deal of damage.

Majestic and beautiful, stingrays are quite the sight when you see one on a dive. However, these creatures are also best admired from a distance. Attacks on people are uncommon but can have deadly consequences. Like most animals, a stingray will only attack when it feels threatened. Being calm and respecting their personal space will keep you safe as you navigate waters that house these creatures.