The manta rays (we count both Manta alfredi and Manta birostris) are the largest of the rays in the family Myliobatidae. The largest known specimen was more than 7.6 metres (25 ft) across, with a weight of about 1,300 kilograms (2,900 lb). It ranges throughout waters of the world, typically around coral reefs.

They have the largest brain-to-body ratio of the sharks, rays and skates (Elasmobranchii), a brain which is kept warm during lengthy dives to as deep as 500 metres (1,600 ft) in cold water.

They are exceptionally graceful swimmers and appear to fly through the water on their large wings. Individuals have also been observed to jump clear out of the water, possibly in a form of communication or play. 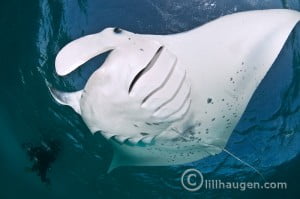 Manta rays are bottom-feeders and filter feeders. Mantas feed on plankton, fish larvae and the like that they strain from the water passing through their mouths and out of their gills as they swim. They catch their prey on gill rakers, flat plates of russet-colored spongy tissue spanning spaces between the manta’s gill bars. An average-sized manta is estimated to consume 20–30 kilograms (44–66 lb) of plankton per day.

Individuals swim in slow vertical loops while feeding, possibly in an effort to concentrate prey items. The fleshy projections on either side of the mouth also funnel prey; when not feeding, these lobes are either furled or closed in front of the mouth. Manta rays are often host to remoras (Remorina spp.), which attach to the underside of larger specimens and consume food that falls from the mouth.[3]

In the Maldives they frequently feed by skimming the surface, but when plankton concentrations are particularly high, hundreds of rays will assemble and form a feeding vortex, sometimes in the company of whale sharks.[citation needed]

Large sharks and in some circumstances orcas, are the manta’s main predators.[15]

Human influences such as fishing and use in Chinese medicines are severe threats to the manta ray population. Chinese are particularly interested in their gill rakers. Taking roughly 12 months for a female manta ray to give birth to a single pup it is no surprise that these creatures are extremely vulnerable to overfishing. Intense fishing pressures and growing international consumer demand caused populations to decline by 30 percent worldwide, with some regions experiencing an 80 percent decline over the last 75 years.[21]

In 2011 Mantas became strictly protected in international waters thanks to its recent inclusion in the Convention on Migratory Species of Wild Animals (CMS). The CMS is an international treaty organization concerned with conserving migratory species and habitats on a global scale. Although individual nations already protected manta rays, it often migrates through unregulated waters, putting it at increased risk from overfishing.

The International Union for Conservation of Nature (IUCN) declared giant manta rays as ’vulnerable with an elevated risk of extinction’ in November 2011.[21]