The grey reef shark (Carcharhinus amblyrhynchos, sometimes misspelled amblyrhynchus or amblyrhinchos)[2] is a species of requiem shark, familyCarcharhinidae. One of the most common reef sharks in the Indo-Pacific, it is found as far east as Easter Island and as far west as South Africa. This species is most often seen in shallow water near the drop-offs of coral reefs. The grey reef shark has the typical “reef shark” shape, with a broad, round snout and large eyes. This species can be distinguished from similar species by the plain or white-tipped first dorsal fin, the dark tips on the other fins, the broad black rear margin on the tail fin, and the lack of a ridge between the dorsal fins. Most individuals are less than 1.9 m (6.2 ft) long. 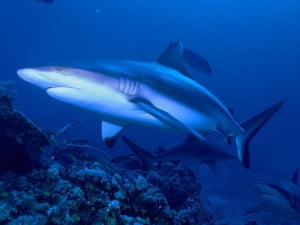 Grey reef sharks are fast-swimming, agile predators that feed primarily on free-swimming bony fishes and cephalopods. Their aggressive demeanor enables them to dominate many other shark species on the reef, despite their moderate size. Many grey reef sharks have a home range on a specific area of the reef, to which they continually return. However, they are social rather than territorial. During the day, these sharks often form groups of 5–20 individuals near coral reef drop-offs, splitting up in the evening as the sharks begin to hunt. Adult females also form groups in very shallow water, where the higher water temperature may accelerate their growth or that of their unborn young. Like other members of its family, the grey reef shark is viviparous, meaning that the mother nourishes her embryos through a placental connection. Litters of 1–6 pups are born every other year.

Grey reef sharks were the first shark species known to perform a threat display, a stereotyped behavior warning that it is prepared to attack.[3] The display involves a “hunched” posture with characteristically dropped pectoral fins, and an exaggerated, side-to-side swimming motion. Grey reef sharks often do so if they are followed or cornered by divers to indicate that they perceive a threat. This species has been responsible for a number of attacks on humans and should be treated with caution, especially if they begin to display. Grey reef sharks are caught in many fisheries and are susceptible to local population depletion due to their low reproduction rate and limited dispersal. As a result, the International Union for Conservation of Nature (IUCN) has assessed this species as Near Threatened.