The Blacktips are small sharks that hunt fish in very shallow water and are thus rarely encountered by divers. The juveniles however often aggregate in mere centimeters of water within sandy lagoons and are thus frequently encountered by swimmers, snorkelers and beachcombers who spot the black tips of their dorsal fins sticking out of the water.

The blacktip reef shark (Carcharhinus melanopterus) is a species of requiem shark, family Carcharhinidae, easily identified by the prominent black tips on its fins (especially on the first dorsal fin and the caudal fin). Among the most abundant sharks inhabiting the tropical coral reefs of the Indian and Pacific Oceans, this species prefers shallow, inshore waters and its exposed first dorsal fin is a common sight in the region. Most blacktip reef sharks are found over reef ledges and sandy flats, though they have also been known to enter brackish and freshwater environments. This species typically attains a length of 1.6 m (5.2 ft). 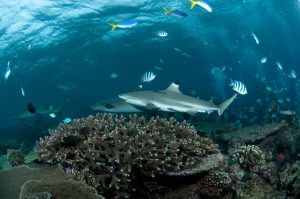 Blacktip reef sharks have extremely small home ranges and exhibit strong site fidelity, remaining within same local area for up to several years at a time. They are active predators of small bony fishes, cephalopods, and crustaceans, and have also been known to feed on sea snakes and seabirds. Accounts of the blacktip reef shark’s life history have been variable and sometimes contradictory, in part reflecting geographical differences within the species. Like other members of its family, this shark is viviparous with females giving birth to 2–5 young on a biennial, annual, or possibly biannual cycle. Reports of the gestation period range from 7–9, to 10–11, to possibly 16 months. Mating is preceded by the male following closely behind the female, likely attracted by her chemical signals. Newborn sharks are found further inshore and in shallower water than adults, frequently roaming in large groups over areas flooded by high tide. 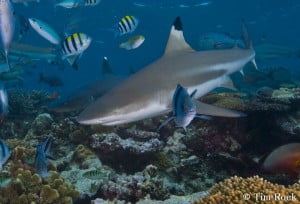 Timid and skittish, the blacktip reef shark is difficult to approach and seldom poses a danger to humans unless roused by food. However, people wading through shallow water are at risk of having their legs mistakenly bitten. This shark is used for its meat, fins, and liver oil but is not considered to be a commercially significant species. The International Union for Conservation of Nature (IUCN) has assessed the blacktip reef shark as Near Threatened. Although the species as a whole remains widespread and relatively common, overfishing of this slow-reproducing shark has led to its decline at a number of locales